Cubane Arrives on the Cucurbituril Scene (2017)

Cubane, an intriguing chemical curiosity first studied in the early 1960s, has become a valuable structural motif and has recently been involved in the structures of a great number of prospective compounds. The first dicationic supramolecular guest 5 is prepared and derived from a 1,4-disubstituted cubane moiety, and its binding behavior toward cucurbit[n]urils (CBn) and cyclodextrins (CD) is studied. The bisimidazolium salt 5 forms 1:1 inclusion complexes with CB7, CB8, and β-CD with the respective association constants (6.7 ± 0.5) × 1011 M–1, (1.5 ± 0.2) × 109 M–1, and <102 M–1 in water. The solid-state structures of the 5@CB7 and 5@CB8 complexes are also reported.

Imidazolium-based guests containing two distinct binding epitopes are capable of binding β-cyclodextrin and cucurbit[6/7]uril (CB) simultaneously to form heteroternary 1:1:1 inclusion complexes. In the final configuration, the hosts occupy binding sites disfavored in the binary complexes because of the chemically induced reorganization of the intermediate 1:1 aggregate. In addition, the reported guests are capable of binding two CBs to form either 1:2 or 1:1:1 ternary assemblies despite consisting of a single cationic moiety. Whereas the adamantane site binds CB solely via hydrophobic interactions, the CB unit at the butyl site is stabilized by a combination of hydrophobic and ion–dipole interactions. 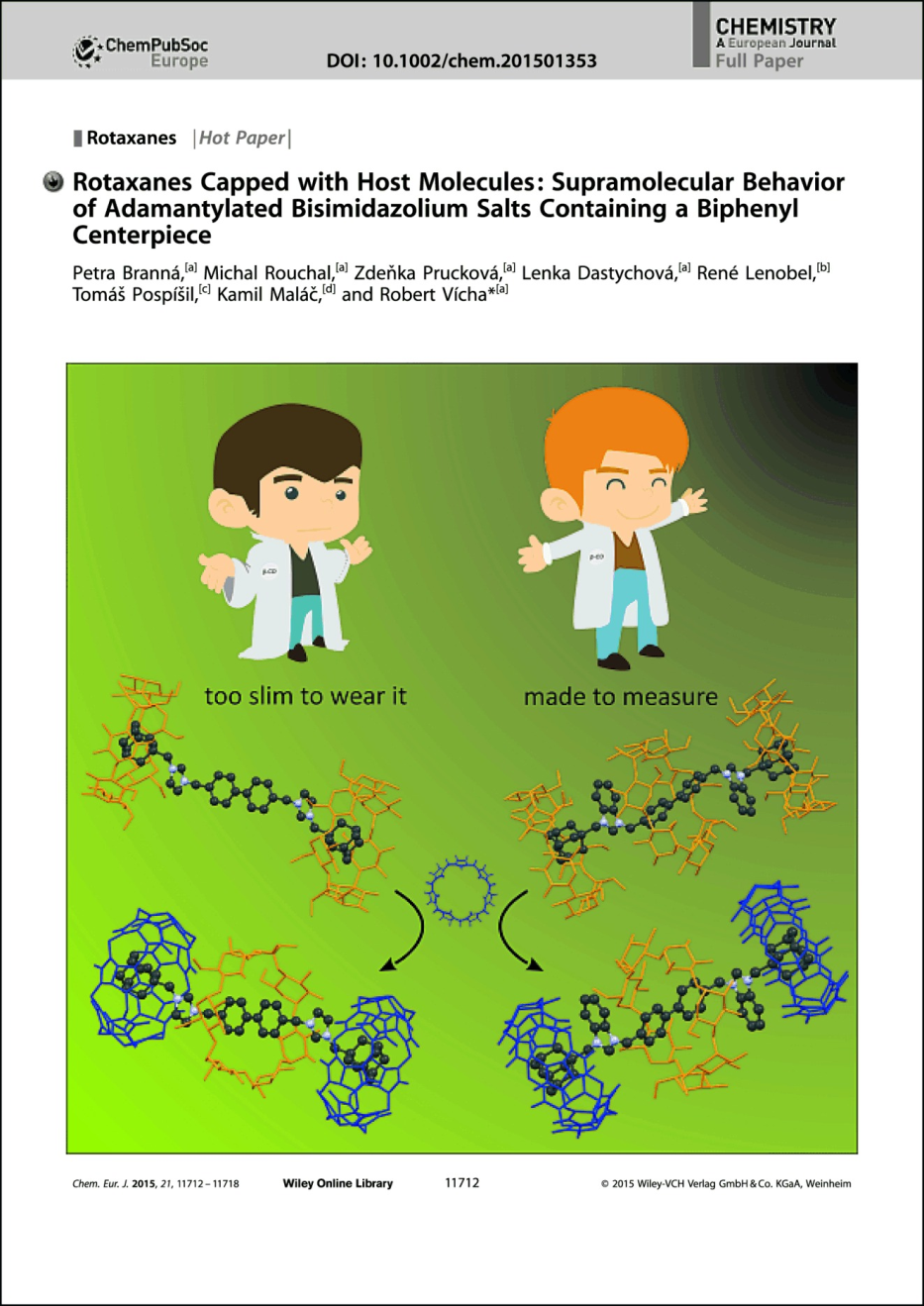 Bisimidazolium salts with one central biphenyl binding site and two terminal adamantyl binding sites form water‐soluble binary or ternary aggregates with cucurbit[7]uril (CB7) and β‐cyclodextrin (β‐CD) with rotaxane and pseudorotaxane architectures. The observed arrangements result from cooperation of the supramolecular stopper binding strength and steric barriers against free slippage of the CB7 and β‐CD host molecules over the bisimidazolium guest axle.

In this study, a 50-membered library of substituted 4-hydroxyquinolin-2(1H)-ones and two closely related analogues was designed, scored in-silico for drug likeness and subsequently synthesized. Thirteen derivatives, all sharing a common 3-phenyl substituent showed minimal inhibitory concentrations against Mycobacterium tuberculosis H37Ra below 10 μM and against Mycobacterium bovis AN5A below 15 μM but were inactive against faster growing mycobacterial species. None of these selected derivatives showed significant acute toxicity against MRC-5 cells or early signs of genotoxicity in the Vitotox™ assay at the active concentration range. The structure activity study relation provided some insight in the further favourable substitution pattern at the 4-hydroxyquinolin-2(1H)-one scaffold and finally 6-fluoro-4-hydroxy-3-phenylquinolin-2(1H)-one was selected as the most promising member of the library with a MIC of 3.2 μM and a CC50 against MRC-5 of 67.4 μM.

Synthesis of 1,4-Benzodiazepine-2,5-diones by Base Promoted Ring Expansion of 3-Aminoquinoline-2,4-diones (2017)

An unprecedented reactivity of 3-aminoquinoline-2,4-diones is reported. Under basic conditions, these compounds undergo molecular rearrangement to furnish 1,4-benzodiazepine-2,5-diones. The transformations take place under mild reaction conditions by using 1,1,3,3-tetramethylguanidine, NaOEt, or benzyltrimethylammonium hydroxide as a base. A proposed mechanism of the rearrangement and the conformational equilibrium of 1,4-benzodiazepine-2,5-dione rings are discussed.

N-(α-ketoacyl)anthranilic acids reacted with phenylhydrazinium chloride in boiling acetic acid to afford 2-(indol-2-carboxamido)benzoic acids in good to excellent yields and 2-indolyl-3,1-benzoxazin-4-ones as by-products. The formation of the latter products could easily be suppressed by a hydrolytic workup. Alternatively, by increasing the reaction temperature and/or time, 2-indolyl-3,1-benzoxazin-4-ones can be obtained exclusively. Optimisations of the reaction conditions as well as the scope and the course of the transformations were investigated. The products were characterized by 1H, 13C and 15N NMR spectroscopy. The corresponding resonances were assigned on the basis of the standard 1D and gradient selected 2D NMR experiments (1H–1H gs-COSY, 1H–13C gs-HSQC, 1H–13C gs-HMBC) with 1H–15N gs-HMBC as a practical tool to determine 15N NMR chemical shifts at the natural abundance level of 15N isotope.